Everyone loves art deco! In it’s heyday in the early part of the 20th century, different modes of traveling the world reached the imagination of the general public, which fueled the wonderful travel themes that were so popular in art deco design.

This painting is an art deco travel theme painting on canvas measuring approximately 3 x 4.25 feet. It was based on a tiny picture emailed to me by a couple who asked to paint a similar artwork for their private residence. Below is the finished product – Here’s a step-by-step on its creation:

Below is the original picture I was sent. DISCLAIMER: I did not create the original artwork and I don’t know who painted it, when it was painted, etc. But it certainly looks like one of those great old travel posters from the early 20th century. 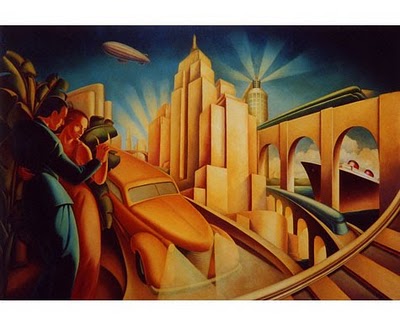 The idea was to keep it pretty much the same except to use a stylish 1939 Duesenberg for the automobile, make the ship more prominent (the famous Normandie, of course) and use the Chrysler building to replace the non-descript tower in the original.

Working from the original, the first thing I did was create a rough outline, as shown below. Note that I always plan things out in Photoshop – it makes making changes much easier. (In the “old days” when I had to draw things out by hand on paper, changes were a real pain!) Next comes the colors. The couple were not sure if they wanted to keep the original warm colors or make the painting cooler. Below are the two variations I did, which was quick and easy to do in Photoshop.

Ultimately the warm palette was chosen, though with modifications. As this couple already owned a print of the classic “Musician” by Tamara De Lempicka, they wanted the blues to match up. So I picked up their picture to bring home to my studio. I then did a little trial and error to get the right paint mixture to match the cooler blues in the Lempicka – The swatch above is held up against a Lempicka painting the commissioners had to compare tones.

Once I was satisified I had the blues correct, I printed the line drawing out on a transparency and used an overhead projector to draw it onto the canvas. I then start painting. Below I have the painting next to the Lempicka to show how nicely matched the blues are now: Now it’s just a matter to start painting in the warm sections of the artwork. Of course, since I made the blues much cooler than in the original, I had to cool down the warm colors as well. Below is a shot of the artwork after getting the “easy” parts of the warms in: I leave the more important and complex elements for last. For the ship, I use the classic Normandie poster below as the basis for my ship. An important alteration to this image is changing the light source from the left side of the image to the right side, to make it correspond to the light direction in the rest of the painting. We also removed the mast for aesthetic reasons. 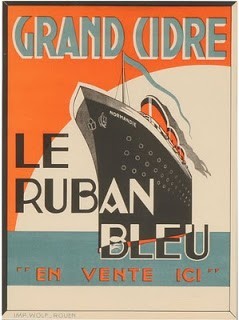 Below is the perfect photo of a 1939 Duesenberg that I used: 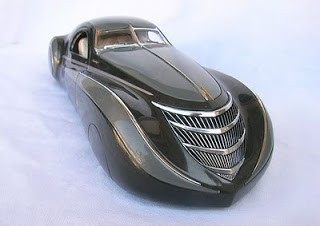 Here’s a closeup of the woman’s face: And once again, here’s the finished product: