The aim was to create something appropriately peaceful for this active tai chi studio. The raggedy tree has a bonsai feel to it, and it stretches over the water and helps lead the eye through the rest of the scene. The bird also leads the eye further along, leaving the viewer to imagine what lies beyond the rocky coast on the far right side.

Both the left and right side have rocky shores. The tree is wind-whipped and worn, symbolically battered by life but as the saying goes, it bends and does not break. I intentionally kept the center of the mural “bare”, with just the light filtering through the clouds and reflecting on the water. This symbolizes how through tai chi (as well as meditation, yoga, etc.) there is a place of light, tranquility and quiet between the rocky shores of our lives. The bird is also symbolic of freedom and adds a necessary “touch of life”.

The mural measures 6.33 feet high by 22 feet wide. It took me about 20 hours to complete, including setup & clean up time. Another 2-3 hours were required for planning the mural and buying supplies.

Here are the steps that went into creating the mural:

Here’s the “before” photo of the wall. After removing the wall hangings, I painted the wall using Behr paint & primer in the “Ocean View” color. Note the wire that was discovered hidden under the large fan. I painted around it and the great folks at the Golden Breath studio took care of it after I left. 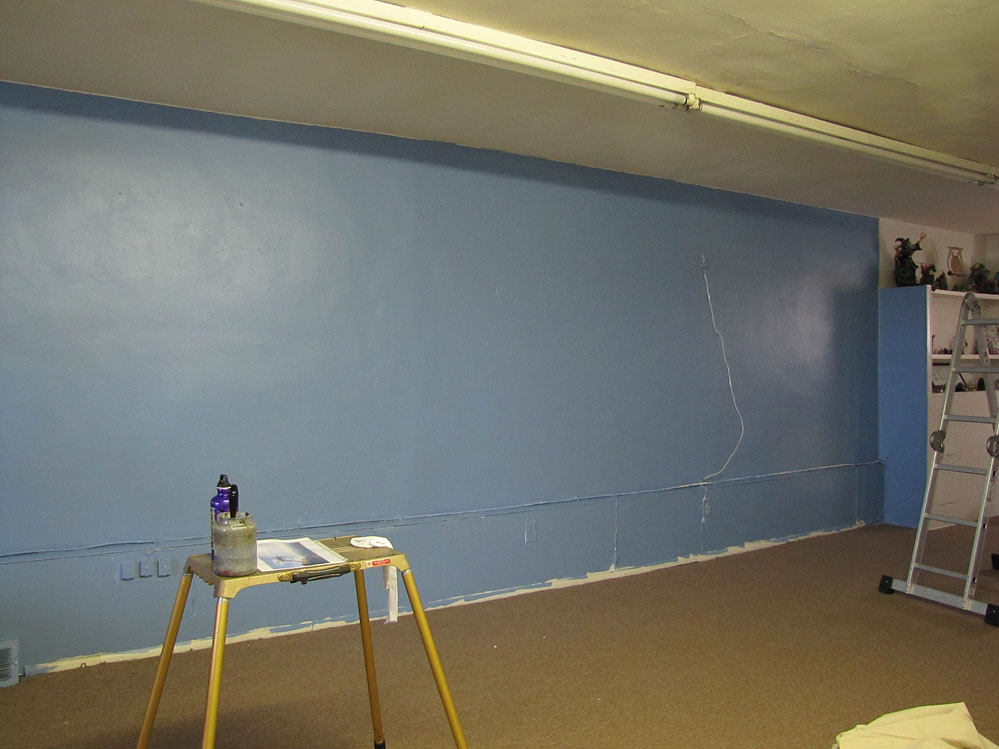 The next thing I did was to establish the horizon. In this case, it’s the line where the ocean meets the sky. 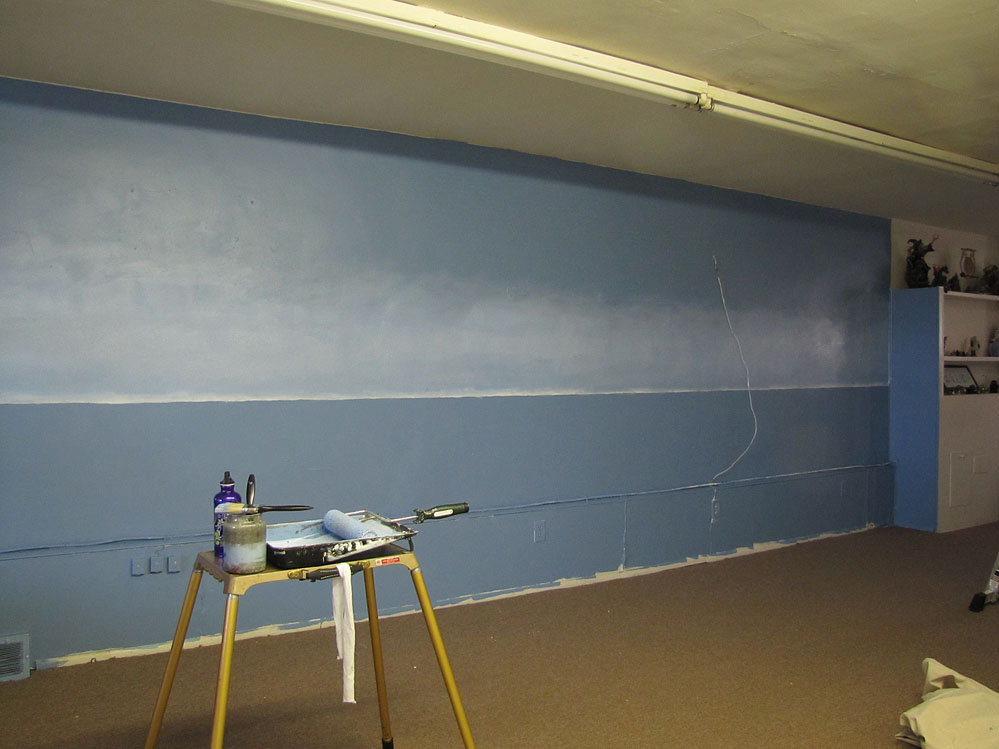 I then begin to add clouds: 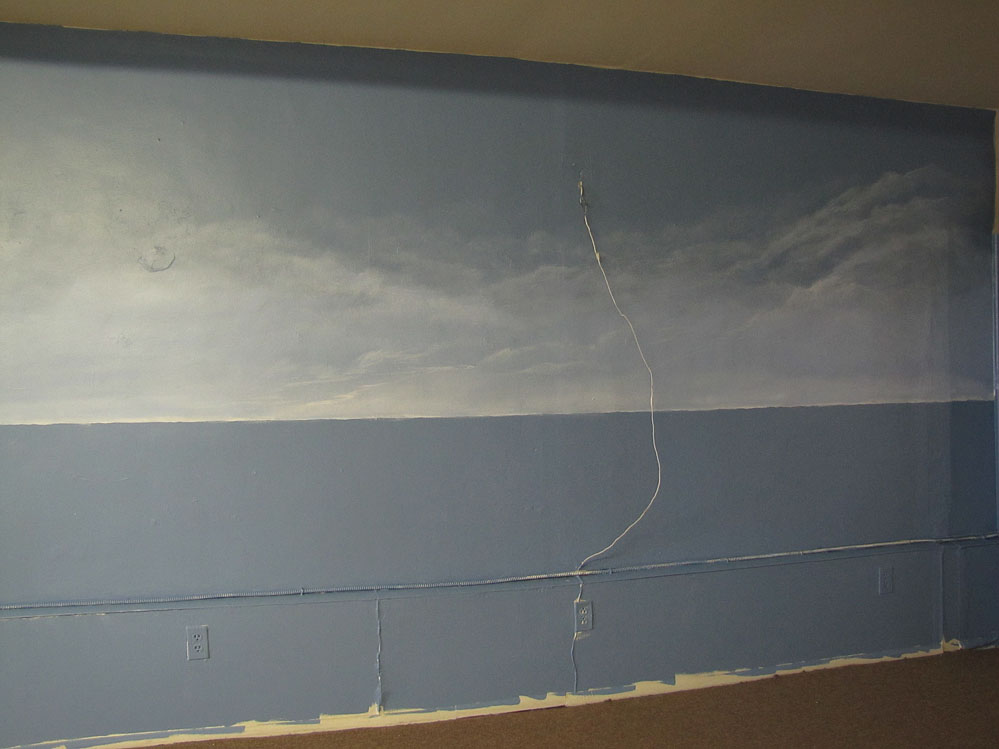 Then I blocked in the large rock outcrop on the left side of the mural: 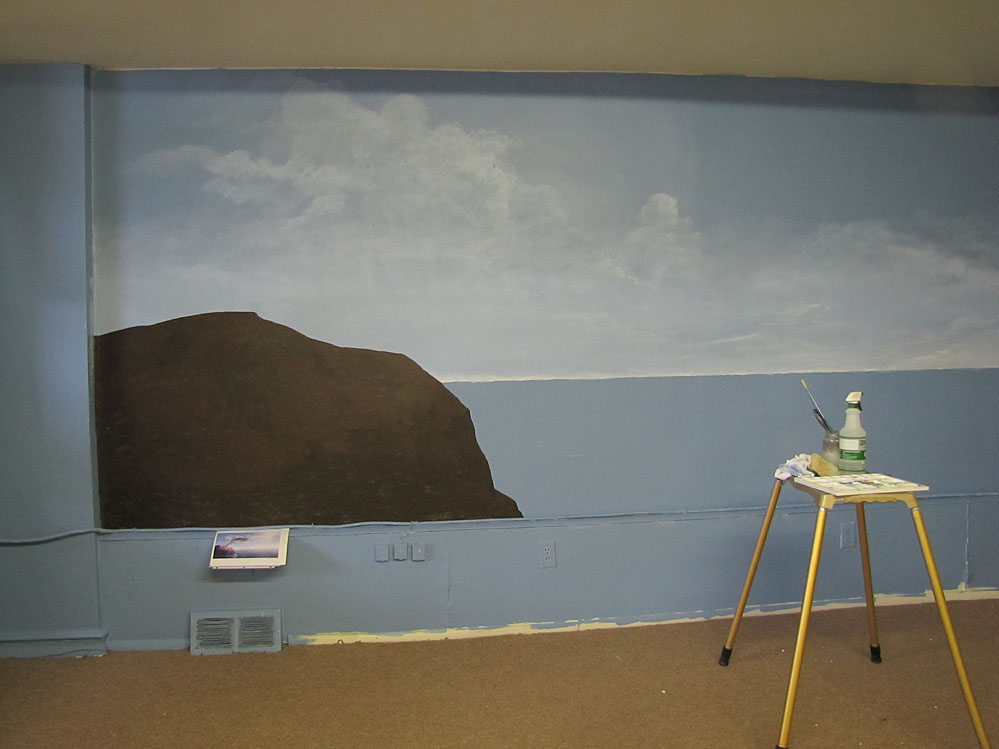 The tree is then blocked in: 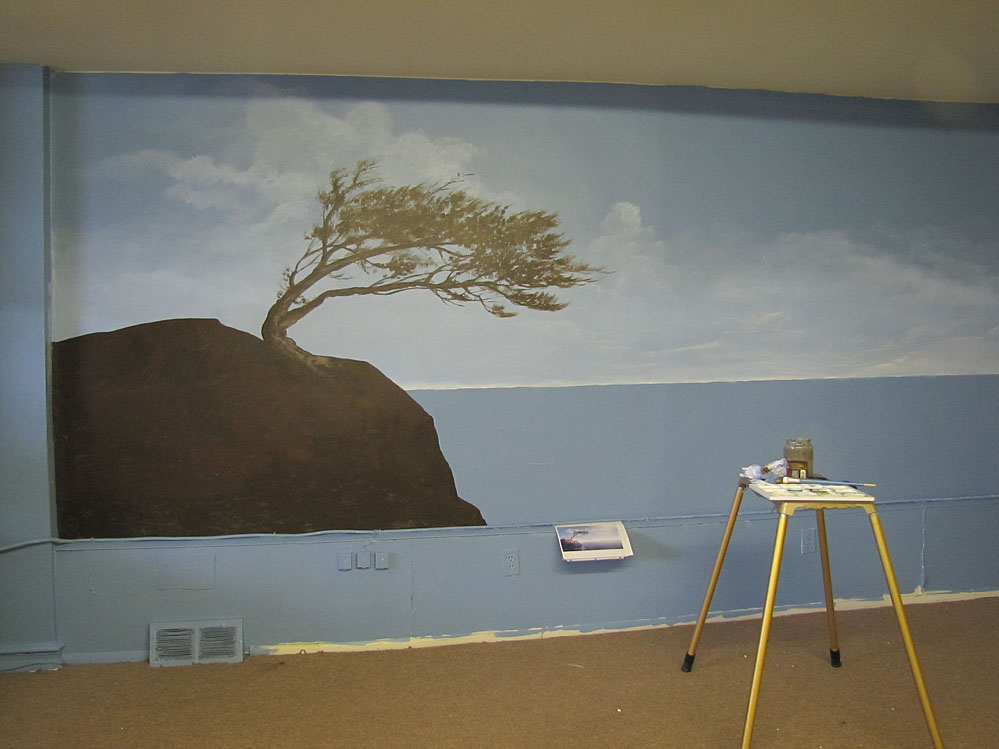 After the forms are blocked in, I then begin to add in the details: 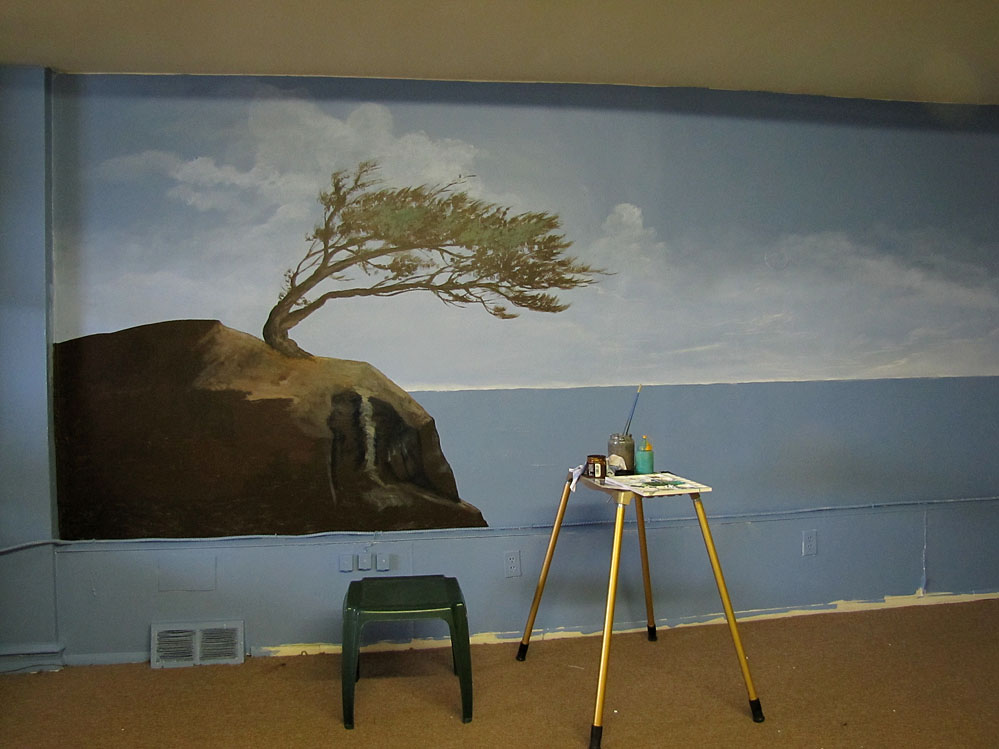 Here’s a closeup of the rock at this stage: 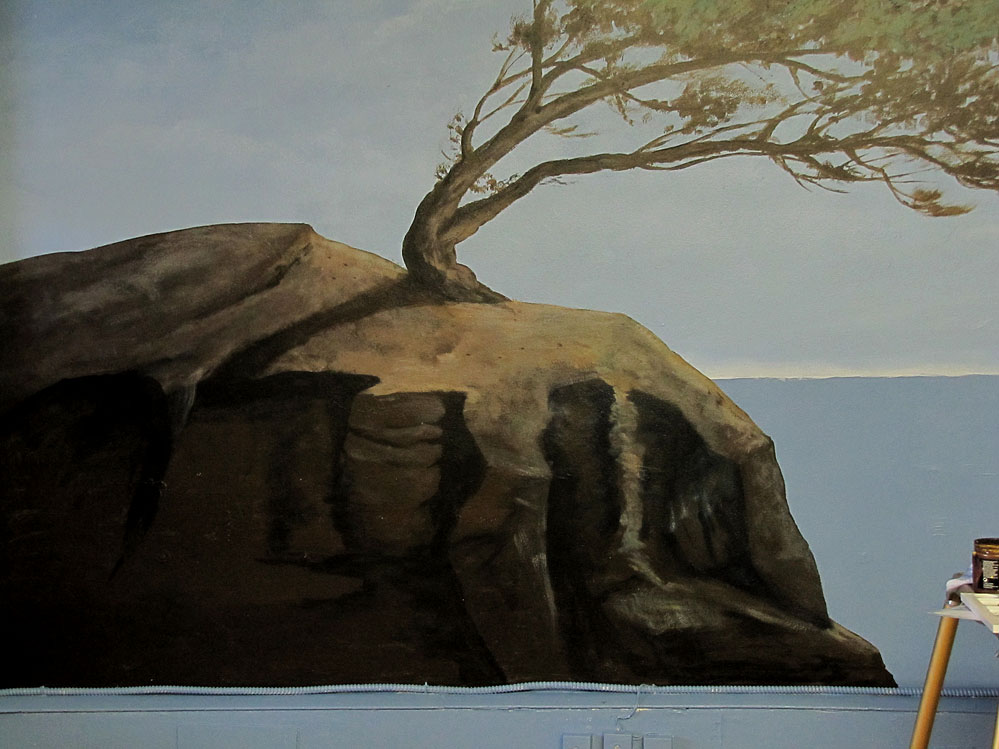 I now begin to add in some of the colors for the water: 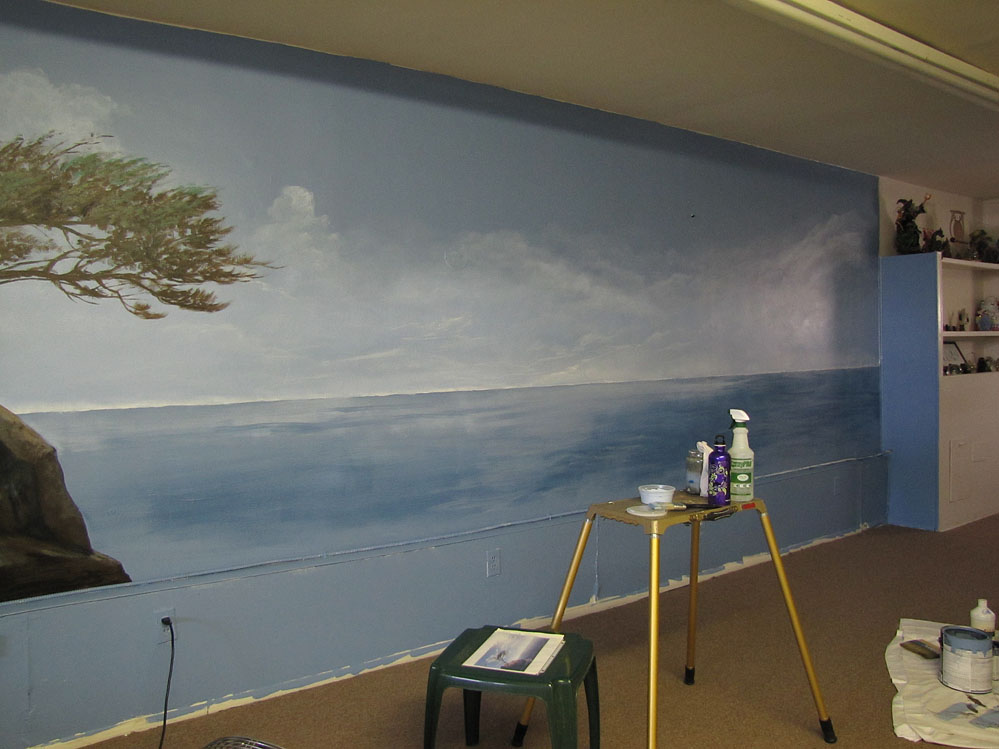 I then add the light radiating from the clouds and reflecting on the water: 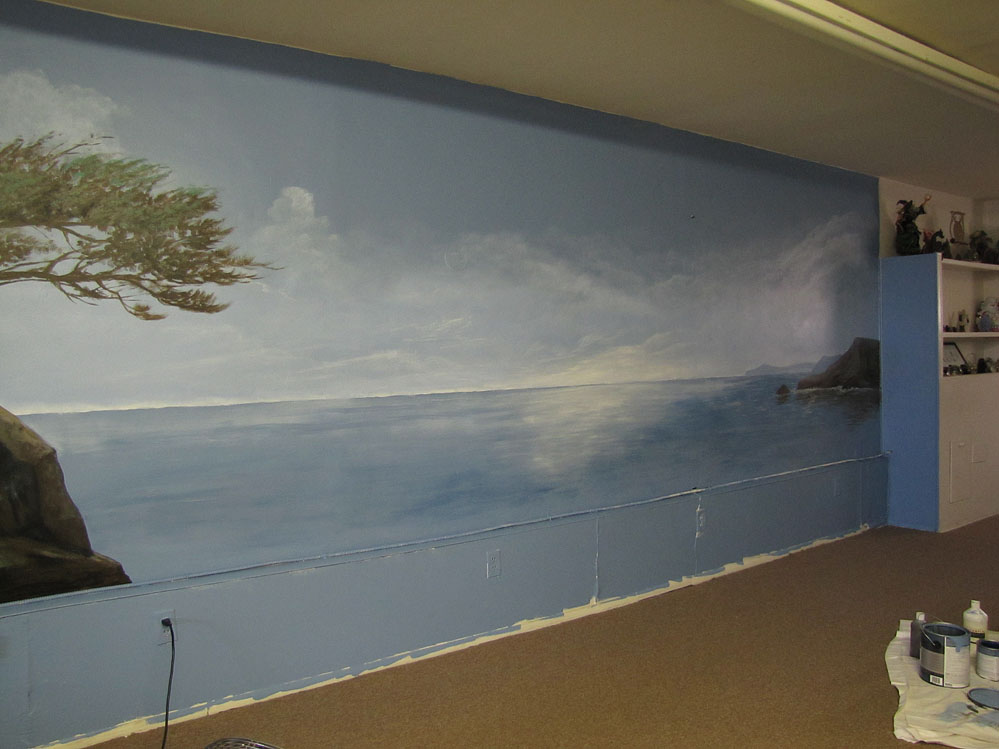 Next I added the bird and more rocks to the right side of the mural: 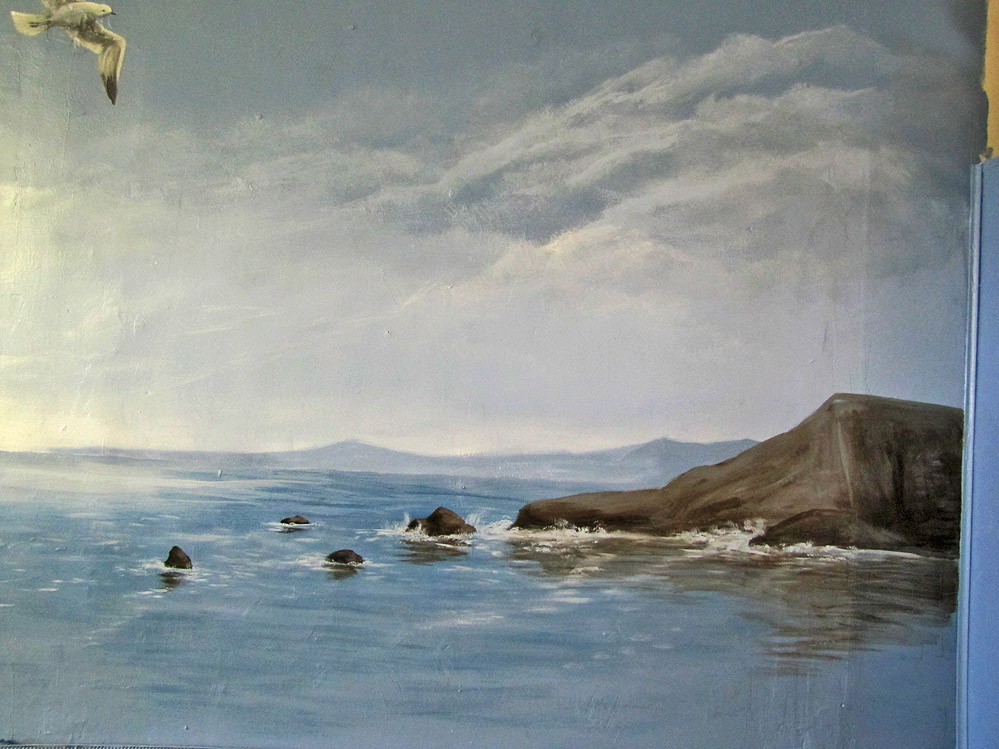 Below is a closeup of the seagull. The spot on the wall where the electrical wire was coming out was especially rough because there was a box installed there at some point in time. It was quite obvious with the flat paint color over it, but when I painted the seagull over it, it makes it less noticeable as you’re looking at the bird and not paying that much attention to the roughness beneath it. 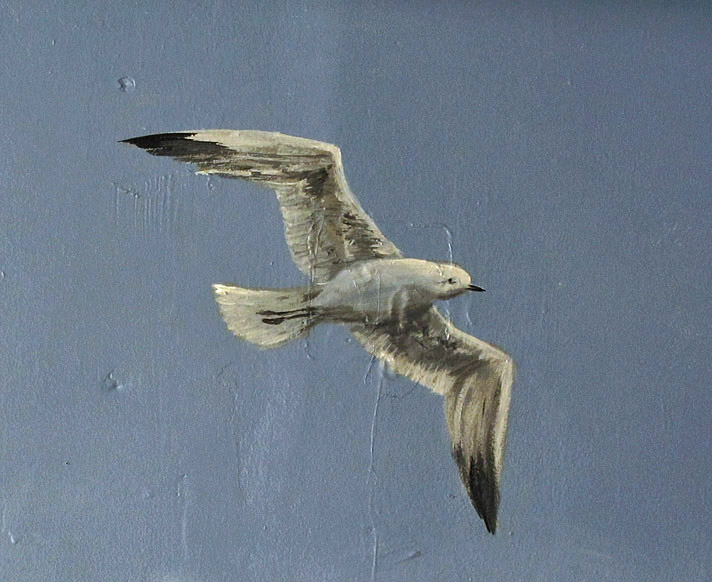 A final closeup of the rocks I added near the main rock: 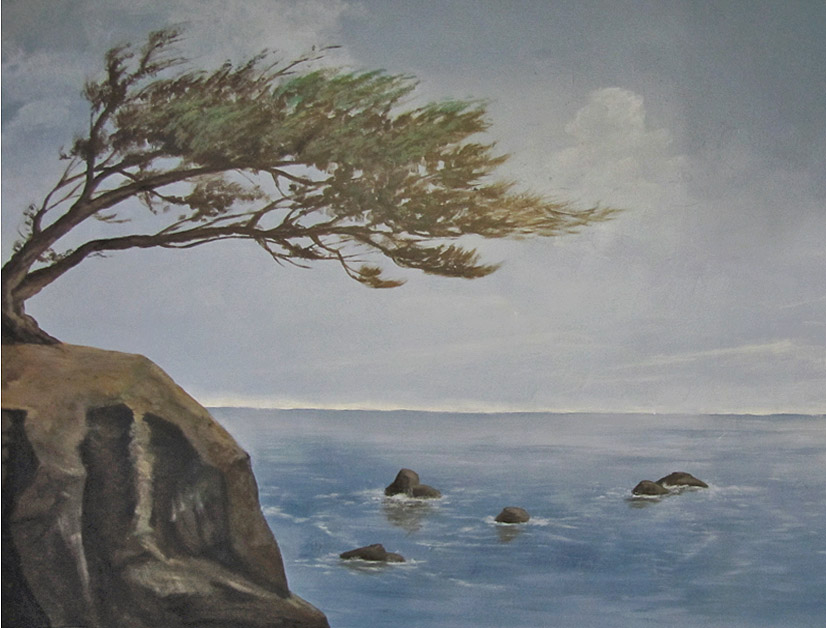 Once again, here’s the final mural: 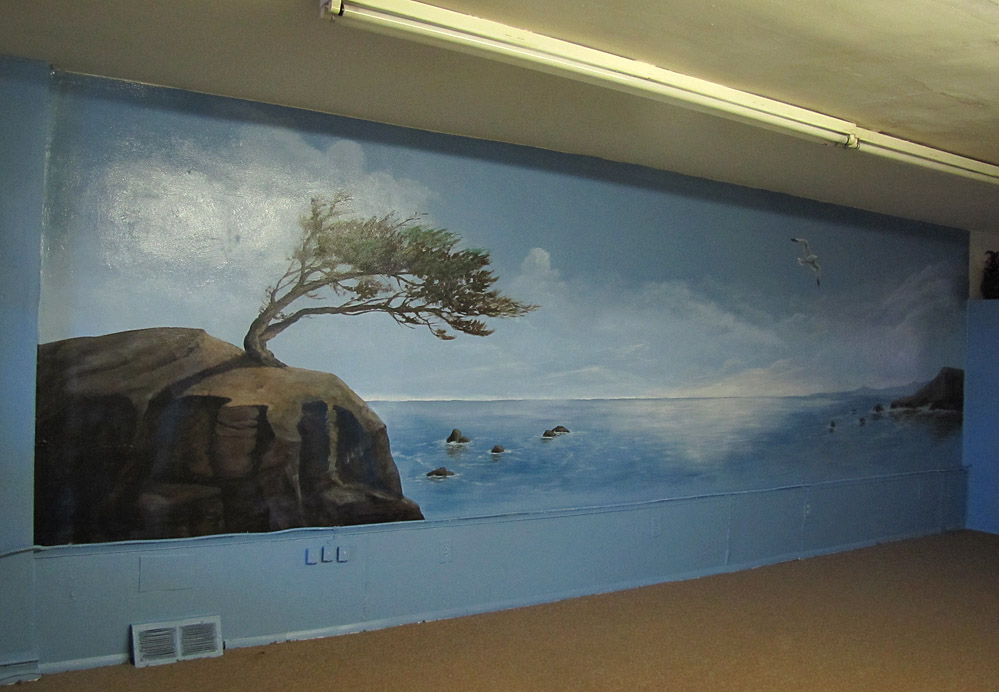